All is well with the Norwegians 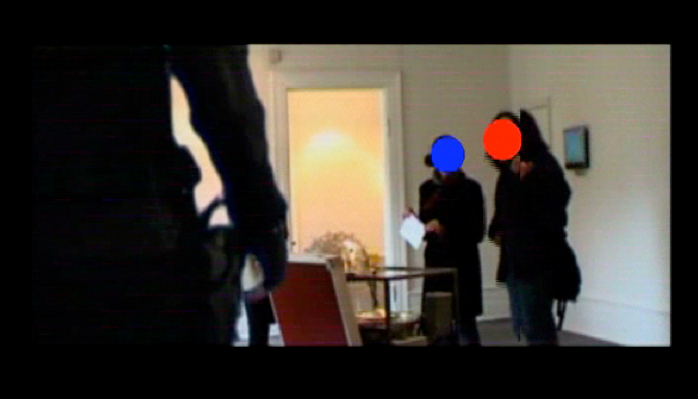 Knut Mork Skagens most recent work was produced for the national exhibition DETOX 2: Testing the Nation, and is an installation where virtual elements are meddeling with a projection of ‘reality’. The installation has been produced with support from PNEK / TEKS, and was shown at Trondhjems Kunstforening between 13.5.04 and 20.06.04. Actors: Torfinn Borkhus, Lasse Haugland
The audience meets a live video mirror of the gallery space — like seeing yourself on TV in the window of an electronics store. But in this mirror, your faces are repeatedly replace with blobs of red, white and blue. And new figures occasionally appear who don’t exist in the real space: armed guards, keeping an eye on the gallery.
Feeling safe?
All’s well with the Norwegians shoves an ever-so-small thorn in the side of the Norwegian instinct of self-preservation. Our compassion with the rest of the world and our support for freedom, peace, and democracy know no limits except those of our own nation. We have it good because we keep a tight hold on what we have. But it’s an invisible hold. We don’t want to know about the mechanisms keeping our wealth, prosperity and peace safely within our borders. We don’t have The Bomb, and would never be seen dead with one (sic), but hey — we’ve always got NATO to do the dirty work for us. read article on kunstkritikk see homepage