In conjunction with the biennial for art and technology, Meta.Morf 2010, TEKS – Trondheim Electronic Arts Centre, presents 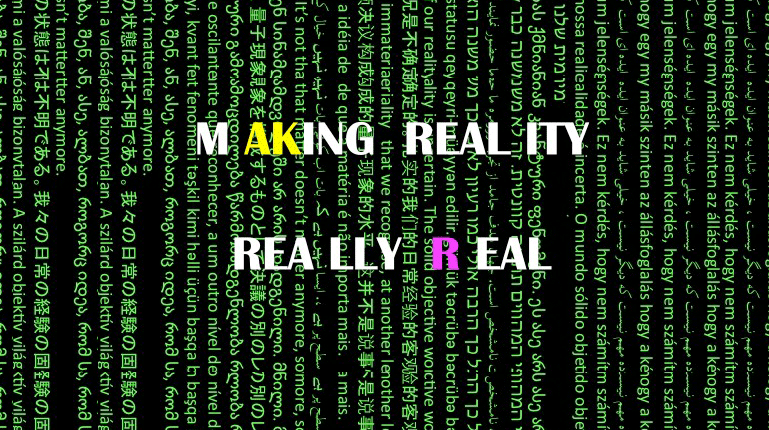 In cooperation with the Planetary Collegium, at the University of Plymouth, England, TEKS – Trondheim Electronic Arts Centre, is hosting the 11th Consciousness Reframed International Research Conference, with the title of ‘MAKING REALITY REALLY REAL‘.

The Consciousness Reframed conference series was founded by Roy Ascott at the University of Wales in 1997. Consciousness Reframed is a forum for trans-disciplinary inquiry into art, science, technology, design and consciousness, drawing upon the expertise and insights of artists, designers, architects, performers, musicians, writers, scientists, and scholars, usually from at least 20 countries.

From November 4 – 6, 2010, the conference is being held in Trondheim, Norway, in conjunction with the new biennial for arts and technology ‘Meta.Morf 2010 – New.Brave.World!‘

As part of the conference a call for papers were published, and as a result more than 35 speakers were accepted in addition to speakers involved in the Planetary Collegium doctoral research programme at CAiiA – Centre for Advanced Inquiry in the Interactive Arts.

The status of our reality is uncertain. The solid objective world of our everyday experience is a representation of an oscillating immateriality that we recognise, at another level of resolution, as constituting quantum phenomena. It’s not that matter doesn’t matter anymore, so much perhaps as the idea that matter isn’t matter anymore. Can we not reasonably ask whether there is a reality beyond what quantum mechanics describes, even closer to the really real? If our material, everyday world depends on our consciousness, what existed in the world before human consciousness had evolved, and how will the world look if our consciousness evolves still further? For many who live largely online, cyberspace accommodates a vivid and consequential normality that renders the material world less relevant to their lives. Until recently, we adapted our sensibilities to fit into separate boxes, variously identified as real, virtual, spiritual, and so on, which we saw as being served by separate ontologies. That separation has now merged into a flowing continuity, in which telecommunications, computing, nano technology, bioengineering and pharmacology play significant roles. The binary opposition between real and virtual realities no longer holds, and the Western conception of the individual human brain creating its own isolated mind may be giving way to the recognition  of a connected intelligence seeking fuller access to a primordial field of universal consciousness. What might be the role of the artist in all of this?  Can a trans-disciplinary art practice contribute to strategies for making the real really real?

Conference.
These issues form the background to a conference of artists, scholars, scientists, and engineers that will constitute the 11th Annual International Research Conference,  Consciousness Reframed: art and consciousness in the post-biological era, convened by Espen Gangvik of the Trondheim Elektroniske Kunstsenter, and co-directed by Roy Ascott, president of the Planetary Collegium, Previously, the conference has taken place in Australia, Austria, China, Germany, and the United Kingdom.

The Planetary Collegium aims to produce new knowledge in the context of the arts, through transdisciplinary inquiry, radical practice, and critical discourse, with special reference to technoetic research, and advances in science and technology. Based in Plymouth UK it has nodes in Zurich and Milan. There are currently 60 registered PhD candidates and 30 doctoral graduates. Roy Ascott founded the Collegium (originally as CAiiA – the Centre for Advanced Inquiry in the Interactive Arts) at the University of Wales in 1994.

Roy Ascott is an artist whose work is invested in cybernetics, technoetics, and telematics. He is President of the Planetary Collegium, based at Plymouth University, Honorary Professor at Aalborg University, Copenhagen and Thames Valley University, London, and and has held senior academic positions in North America, Europe and the UK. His international exhibitions range from the Venice Biennale to Ars Electronica, from North America to Korea. His theoretical work is widely published and extensively translated. His has advised media art institutions in Europe, Australia, North and South America, and the Far East. He edits Technoetic Arts: a journal of speculative research (Intellect) and is Honorary Editor of Leonardo (MIT Press).